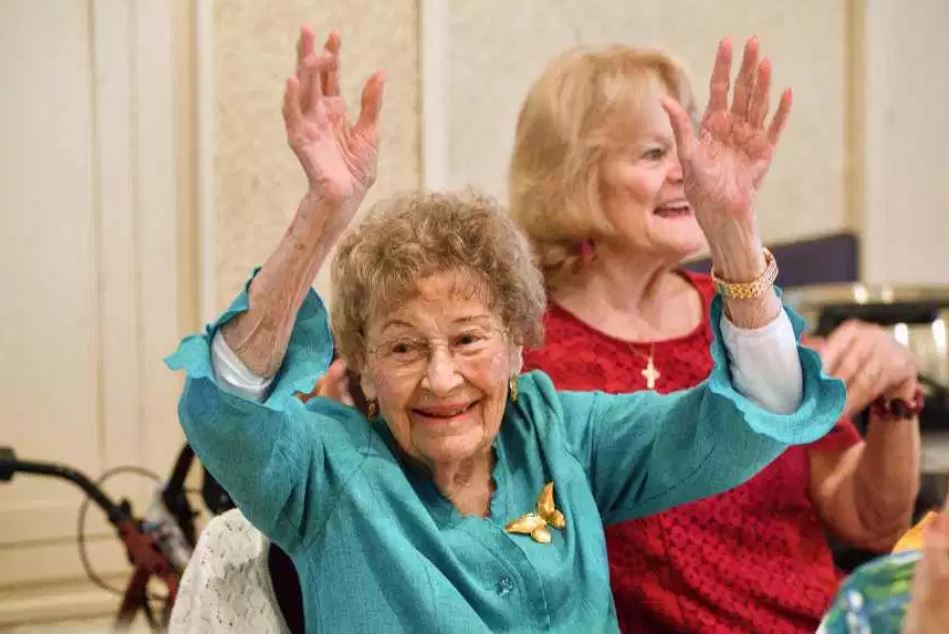 Antoinette Mullen, 106 raises her hands as she is announced as the oldest person in the room during a special luncheon to celebrate residents who are 90 and older in Laguna Woods, CA on Tuesday June 18, 2019

In honor of the Village elders — nonagenarians and up, to be exact — the annual 90s Luncheon served up chicken florentine and an afternoon of Facetime with fellow age allies on Tuesday, June 18, in Clubhouse Five.

The tradition stands nearly 25 years, Clubhouse Five supervisor Ted Ball said, with over 200 in attendance this year. A total of eight centenarians attended, with Antoinette Mullen at 106 the eldest.

“This luncheon is really just about honoring their lives,” Ball said.

A string trio made up of harp, cello and flute players set a soundscape for the afternoon event. Another special tradition is to ask for veterans to stand for a special honor. Ball estimated that there were at least 45 to 50 veterans in the crowd, with 80% having served in World War II.

The sweetest parts of the luncheon, at least for self-ascribed chocolate- and dessert-oholic Marilyn Sipiora, was the cream cheesecake and the new friends she made. Sipiora, 92, has gone to the event three years now since meeting the age requirement.

“I always meet the nicest people; the lady that I sat next to, you would have thought we were old friends,” she said, noting how she gifted a packet of her poems to each of her six tablemates. “I always enjoy these luncheons. Especially when the price is right — it’s free!”