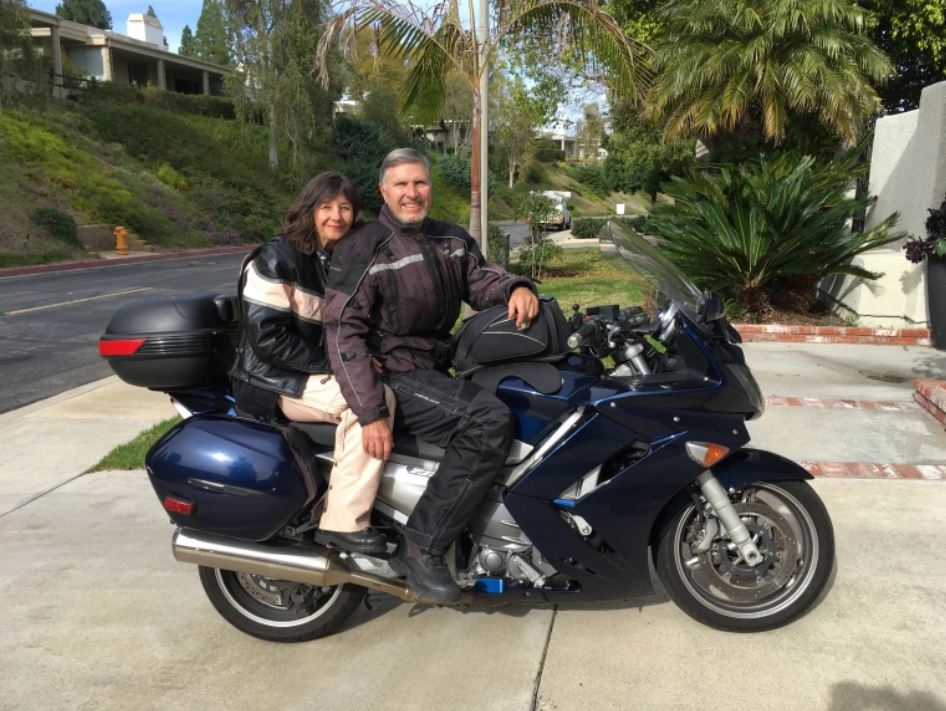 Our love is blue

Love is ever-blooming in Laguna Woods Village. A boyfriend had given me a blue motorcycle helmet, which was strange because I wore pink leathers.  A blue helmet didn’t match. Turned out to be the best present ever.

Fast forward two years, sans helmet-giving boyfriend.  I’m living in Laguna Woods Village. I was out for a walk one sunny day when I saw a fellow washing his motorcycle. His blue motorcycle.

As I walked by him and his blue bike I said, “If you ever want a passenger, I have my own helmet.”  I didn’t even stop, just said it as I walked by. A couple weeks later he was riding the bike, saw me out walking, and followed me home.

We talked for several minutes, he asked for my phone number, then I didn’t hear from him for almost two months. He’d taken a motorcycle trip across the country. I’d almost forgotten about it when one Saturday morning my phone rang and I was asked if I still would like to go for a ride.  I asked, “When?” He said, “Half an hour.” I said, “Meet you out front.”

That was 10 years ago. Robert and I are still riding a (newer) blue Yamaha FJR 1300 motorcycle. 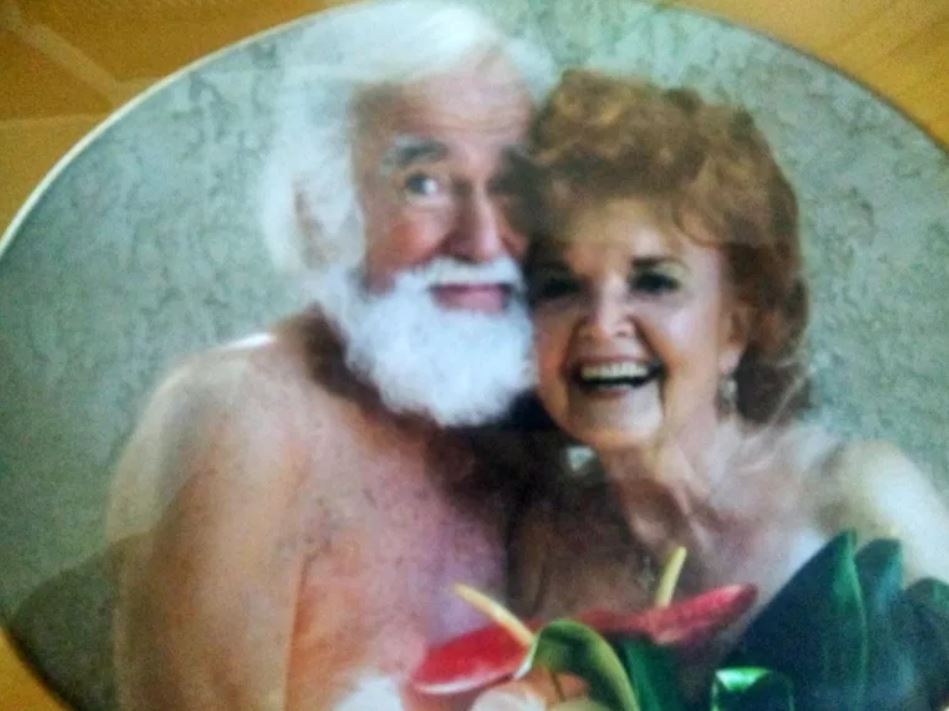 Jan Knight is a queen in her own home, and she couldn’t be happier. At 96, the Village resident has been married to her king, Ken Knight, 94, since only 2009.

It didn’t have to be such a late-in-life love story. The two first met and dated decades earlier. But, as usual, life always seems to come up with twists and turns.

It’s now Ken’s third marriage and Jan’s second, but to see them together is a lot like watching newlyweds.

That’s according to Jan’s daughter, Linda Orr, who says the couple are so in love, “they cannot keep their hands off each other, they are lovey-dovey all day. It really is adorable to see.”

Orr, their caregiver, said the couple first met in the 1970s in Glendora,where they lived. Ken walked into the United California Bank, where Jan was head of new accounts, and was lovestruck.

“I walked in and there she was sitting in the front. I thought, ‘Wow, she is a gorgeous young lady,’ and I took a photo of her and asked her out on a date,” said Ken, a former junior high school art teacher.

The two went out on a date at church later that day, and they got along great. But life got in the way of their budding romance. Each went on to marry other people and started families.

“When I saw her, I asked her out, and we had a romance, but we were conscious not to be fast,” Ken said. “We were single and went together for a few months. We wanted to make sure we weren’t making a mistake. We had both moved to San Juan Capistrano years before.”

A few months into dating, Ken said, he woke up one morning and “heard a song, and it was as if the Lord was saying marry that woman.”

During a Sunday School class at the church, Ken got up and told the teacher he had something he wanted to say.

“I said no man should be alone as the Bible says, and I called Jan up, got down on one knee, and asked her to marry me,” he said. “I put a ring … on her finger and she accepted. I gave her a Hallmark kiss and it was a happy day.”

A few months after he proposed, they were married in that church, with more than 200 guests, and they haven’t looked back.

“It was filled with family and friends, the whole church, it was crowded,” Ken said. “It was the biggest wedding I had. My first was in a hut in Mississippi, and the second in a house.”

The couple lived in Ken’s house in Capistrano for a few years before moving to the Village and making the best of their love and their lives.

“We are deteriorating and going through potholes, but we enjoy all we can and are happy to be with one another,” Ken said. “She is my queen, and I respect her every day, and I am thankful for her.”

Jan shares the sentiment: “Yes, he is a good-looking man, and he is my king, and the best thing about him is that he makes me know that I am special.”

Orr, who visits a few times a day, can attest to that: “My mother is truly happy, and it makes me happy. Ken is very attentive; he dotes on her and treats her like a queen. She deserves it.”

The couple spends most of their days watching religious TV shows and Hallmark movies, and taking short walks each morning before Orr arrives.

Ken makes his love a beautiful breakfast tray of fruit every morning, and she eats up his kind words and love.

Who could ask for anything more?

“I’m thrilled that at 96 my mother has someone who truly loves her,” Orr said. “Everybody deserves to have that kind of great love in later years.” 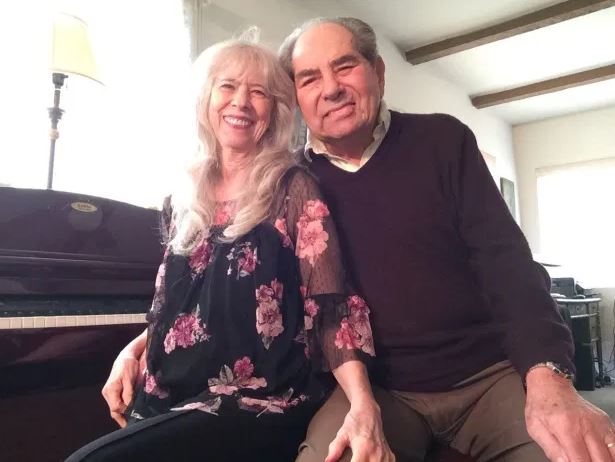 Singing a melody of love

The David Hartman and Sunshine Lutey saga is a true Village love story. Both long-time residents, David and his first wife, Phyllis, came to the Village in 1994; Sunshine and Lloyd, her first husband, arrived one year later. David and Lloyd became golf buddies.

Early in 2005, after 53 years of marriage, David lost Phyllis to catastrophic illness; a few months later, Sunshine lost Lloyd, her husband of 43 years. In 2006, David and Sunshine discovered a life together filled with love, travel, golf and music. In 2008, they married. They planned and performed in musical events for various charities and with friends and many talented entertainers from the Village formed the Sunshine Performance Club. They produced 20 major shows in the 10 years from 2008 through 2017 in both Clubhouses Three and Five and donated well over $100,000 to charity. In 2018, they switched to smaller productions. They continue to perform in weekly adult day care shows, which began in February 2015. The couple is thrilled that serendipity brought them together and continues to play a large part in their lives, filled with love, happiness and music; they plan to share the joy of music as long as possible.

Was it our first unexpected meeting at the California Club dinner dance?  He smiled at me and then asked if he could buy me a glass of wine. On the return to the dinner table, he asked me to dance. He said he like the black stockings I was wearing. Or was it our first date at Clubhouse Five to watch the Super Bowl game? I invited him to dinner that same day. We are celebrating the third anniversary of both; we have since married and having as much fun as when it all began.  We both enjoy golf, dancing, cooking, watching sports and traveling. He is such a romanticist, and I know I won’t be disappointed with his Valentine’s gift.

Never To Late To Date Show on Village TV